Coupe18 Ireland: About, Schedule, and Results 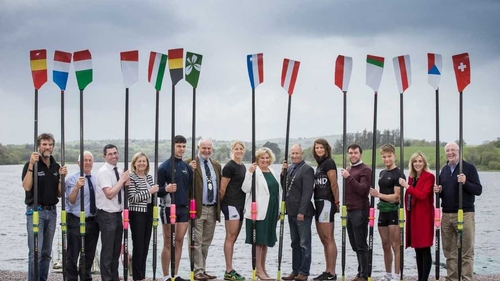 The Coupe de la Jeunesse provides friendly competition whilst respecting others, and offers an environment which enables all to perform at their highest potential.

2.2 Removal, replacement or additional members of the Coupe de la Jeunesse must be agreed by 2⁄3 of the member federations.

2.3 Member countries must attend the Ordinary Delegate Assembly even if they are not represented at the match.

2.4 Countries must confirm their participation by 1st May of the match year.

2.5 Retirement from membership is by written notification from the National Federation governing bodies to the Executive Committee of the Coupe de la Jeunesse.

3.1 The Coupe de la Jeunesse is an event for junior athletes who are not yet performing at a level which merits selection for the World Rowing Junior Championships by their National Federations.

Competitors of the Coupe de la Jeunesse may act as substitutes in a World Rowing Junior Championship team.

Exceptions will be treated by the Executive Committee upon request from the member.

3.2 In principle the match will be held one week before the World Rowing Junior Championship.

3.3 Members of national crews shall wear the racing uniform of their member federation. The blades of all oars and sculls shall be in the registered colours of their federation.

3.5 The Coupe de la Jeunesse trophy will be presented to the overall winner of the competition. This trophy is to be held for one year.

3.6 In the event of a tie the winning country will be decided by boat type:

3.9 Competitors must be nationals of the country they represent. Nationality will be determined by passport or national identity card and there will be no exceptions*.

4.2 An Extraordinary Delegate Assembly meeting may be called by the Executive Committee as and when required.

4.5 The Delegates will elect the Executive Committee members at the Ordinary Delegate Assembly. Nominations for any elected role can only be made by the nominee’s own national federation.

The Executive Committee is responsible for the overall management of the Coupe de la Jeunesse including conducting meetings, communications and supervising the annual Constitution / constitution p. 4 organisation of the event/match in conjunction with the Organising Committee. An Executive Committee member may not represent a member in the Delegate Assembly and may not vote on behalf of a member.

4.8 The Secretary-General must be in receipt of the name of the federation’s delegate at least 14 days before any Delegate Assembly.

4.9 The local Organisation Committee, overseen by the National Federation, is responsible for the organisation of the current year’s match.

4.10 The four officers will serve for a term of four years, with an upper limit of three terms. The officers change at the end of the regatta.

4.11 The officers should, if possible, be from different federations, and their period of office shall not run concurrently. Each year, an officer shall stand for election in the following order by function. The President is elected in the year following the Olympic Summer Games.

If any officer is unable to complete his/her period of office, the Executive Committee will

appoint a temporary officer for a period not exceeding three years.

4.12 The function of the four officers is as follows:

President – to represent the interests of the Coupe de la Jeunesse to national federations and governing bodies; to chair all meetings of the Delegate Assembly and Executive Committee; to open and close the event; to co-ordinate the work of the Executive Committee in the overall management of the Coupe de la Jeunesse and to liaise with the Organising Committee of the individual matches.

Secretary-General – to manage the day-to-day administration of the Delegate Assembly and Executive Committee; to manage the finances of the Coupe de la Jeunesse; to call all meetings, arrange agenda, and keep minutes; to maintain the records of the event; to present audited accounts to the Ordinary Delegate Assembly. To visit, check and advise Organising Committees on team accommodation, catering, transport, Opening Ceremony, Victory Ceremony and any social events.

Technical Adviser (Facilities and Race Control) - to visit, check and advise Organising Committees on their course facilities, and to oversee the on-water operation during competition. To approve the Team Manager Manual. To advise the President of the Organising Committee on the needs of the event, to observe the racing, to check that all on-water jobs have been filled with appropriately qualified personnel and to draw up a technical code of practice.

Technical Adviser (logistics and services)- to write and maintain the Coupe website; to commission and supervise the Social Media activities; to visit, observe and advise the Organising Committee on IT infrastructure of the event; to oversee the entries, crew and boat changes and provide the necessary information to the local Organising Committee. To organise and run the draw and release the start lists. Monitor the production of timetable, race information (start lists, results, and official communications) and the Constitution / constitution p. 5 match score.

a. The Winter meeting takes place in the first quarter of the year.

b. The Winter meeting is held at the venue for the Coupe de la Jeunesse in that year.

c. Members are encouraged to send a delegate to the winter meeting.

d. The Winter meeting consists of a joint meeting with the Organising Committee, a visit to the venue and proposed accommodation and a meeting to discuss general Coupe matters.

e. The function of the meeting is consulting, sharing, communicating and informing delegates and advising Organising Committees.

6.1 The Executive Committee and the members can propose constitutional amendments.

6.3 Changes to the constitution will operate from the date of the meeting.

6.4 Changes to the Rules of Competition and Code of Practice can be proposed at any meeting of the Delegate Assembly and will operate from the following month.

6.5 The voting rights for any Delegate Assembly is calculated on the latest available running mean of entry size over the previous three-year period.

7.1 Each participating country will contribute to a central fund, held and administered by the Secretary-General. The fee will be agreed annually by the Delegate Assembly.

7.2 Membership dues must be paid by the 31st March of the match year. The Executive Committee will have the right to refuse an entry from any member federation which has not paid by that date.

7.3 The accounting year will run from the 1st July to the 30th June. Two inspectors will audit the financial records; they will be the delegates for the present and subsequent match.

7.4 Members of the Executive Committee, whilst acting on behalf of the Coupe de la Jeunesse, may claim out of pocket expenses.

7.5 The accounts for the preceding financial year will be presented at the Ordinary Delegate Assembly held during the match.

8.1 National federations applying to host the match must adhere to the outline laid down in the Coupe Code of Practice (administration).

8.2 Any presentation given to the Delegate Assembly by an organising committee must include an accurate presentation of the current state of the course and accommodation facilities.

8.3 Local organising committees may use the Coupe die held by the Coupe de la Jeunesse for the medal face.

8.4 Entries must be submitted electronically as directed by the Technical Adviser (logistics and services).

8.5 The form of the opening ceremony must be agreed by the Executive Committee and should be limited in time and extent. It will take place early on the Friday evening so as not to interfere with the competitors’ mealtimes.

8.6 The closing ceremony will be linked to the Junior Men’s VIII (JM8+) medal ceremony.

The sequence of events will be as follows:

8.7 Each National Federation will be responsible for the cost of their team’s transport, catering and accommodation.

The Coupe de la Jeunesse expects all participants at the regatta; including teams, athletes, coaches, officials, volunteers and supporters, will behave in a manner that is appropriate for a junior sporting event A group or individual is expected to behave in a manner which supports these aims, if not then the Executive Committee may use any sanction it sees fit to ensure its standards are maintained.

The latest results from first place to 5th and the rowers taking part.

Making up some of the crew list for the Irish team are members of staff at www.betinireland.ie. They took part in a charity row and have been asked if they would like to become annual members of the regatta’s charity organisation.

They are Niamh O’Donoghue, Shane Hennessey, and Orla Byrne who is the BetinIreland Editor-in-Chief.